Storyline:
Dubious Bounty Killer Hank Fellows tracks bank stage coaches to observe them being robbed. Only afterwards does he move in on the bandits to collect his reward. The manager of the Omaha city bank persuades him to accept double the reward money on his last job if, this time, Fellows will prevent a threatened robbery taking place at all.

Reviews:
"Bounty Killer Craig Hill follows monetary shipments and rescues the money after they're robbed. After a typical job, he gambles his ten-thousand dollar reward on a double-or-nothing proposition involving himself protecting a gold cache. Trying to take the gold is George Martin, the bandit that killed Hill's brother some time before.

A good enough Italian western, this has some decent action and suspense scenes, with Hill's character pulling off some excellent rifle work. Yes, it's derivative, but still pretty solid. The climax is well handled too.

Director Tonino Valerii went on to make My Name Is Nobody, one of the best spaghetti westerns ever.

Here, villainous Martin looks a bit like William Shatner, if he were cast as a Klingon!" Written by FightingWesterner on IMDb.com.

"This above average spaghetti western focuses on a bounty hunter who is hired by bankers in a small town to protect their cachet of gold against a predicted heist by Mexican bandits.

The director here was Tonino Valerii who was assistant director to Sergio Leone in his first two classic westerns, A Fistful of Dollars (1964) and For A Few Dollars More (1965). He then went it alone himself as a director making very good efforts such as Day of Anger (1967), A Taste of Killing was his debut as director and while it isn't quite as good, it is still definitely an impressive effort and better than most in its sub-genre. It benefits from a good turn from Craig Hill in the central role as the bounty hunter. He has unusual vulnerabilities such as the fact he can't read but he also has the more typical spaghetti western trait in that he is in possession of an unusual weapon, in this case a sniper rifle with telescopic sight. He is a nicely amoral central character who waits for robberies to happen and then proceeds to rob the robbers and return the money to the authorities and so bagging 10% in the process! The movie ends with a wry scene where our hero observes a gang of new bandits through his telescopic lens as they prepare to ambush the gold shipment he protected earlier on. He couldn't be happier - another 10% deal looks imminent." Written by Red-Barracuda on IMD.com. 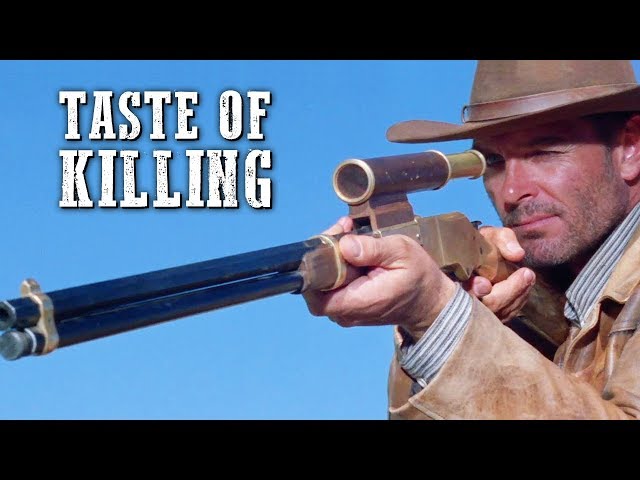